Last summer during my week in Italy, I tried to visit as many cities as I could, pretty much visiting a new place daily. Always being on my feet. Sure, it was tiring, but it was worth every second. So I decided to hop onto the train that took me to Paestum, the hidden Greek city in Italy which expresses the mixture of two of the greatest and most impactful colonies ever to exist.

Paestum is located near the west coast of Italy, southwest to Salerno, which I briefly passed. The city is calm and quite a popular location for wedding photography as I found out while exploring the ruins. There is an entrance to the ruins and also close by there is the museum that hoards the many Greek artefacts and explains its history in great detail that I suggest visiting before going to the ruins. You have to pay entrance for both so be sure to be carrying some cash! After learning and becoming more aware of Paestum’s history.

Originally the city was named Poseidonia, and it was constructed by the Greek colonists around 600BC. After many years’ resistance, the city came under the domination of the Lucanians that was a tribe of indigenous Italic people. This occurred sometime before 400 bc, after which its name was officially changed to Paestum and has remained for many years.

Paestum was still good during the early years of the Roman Empire, but the gradual residue up of the mouth of the Silarus River eventually created a malarial swamp, and Paestum was finally deserted after being sacked by Muslim raiders in ad 871. The abandoned site’s remains were rediscovered in the 18th century. Following your trip at the Archeological Museum of Paestum, you can wander around the ruins and let the simple elegance and beautiful atmosphere be soaked into your being. It is beautiful especially in the afternoon to spend a good amount of time and watch the sun set before going back to your place of stay.

This ‘hidden’ city shows absolute beauty, and the ruins have been left almost unimpacted by anything since 600BC. They all stand very firm and are proud of their origins. When visiting Italy and have some spare time, Paestum is a place one should attempt to spend some time learning its history and breathe in its history and appeal. 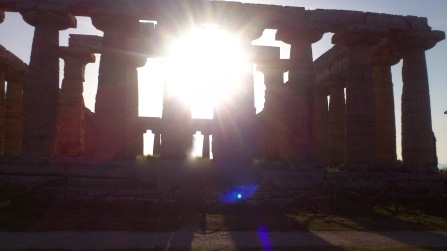 4 thoughts on “A Greek City in Italy – Paestum”